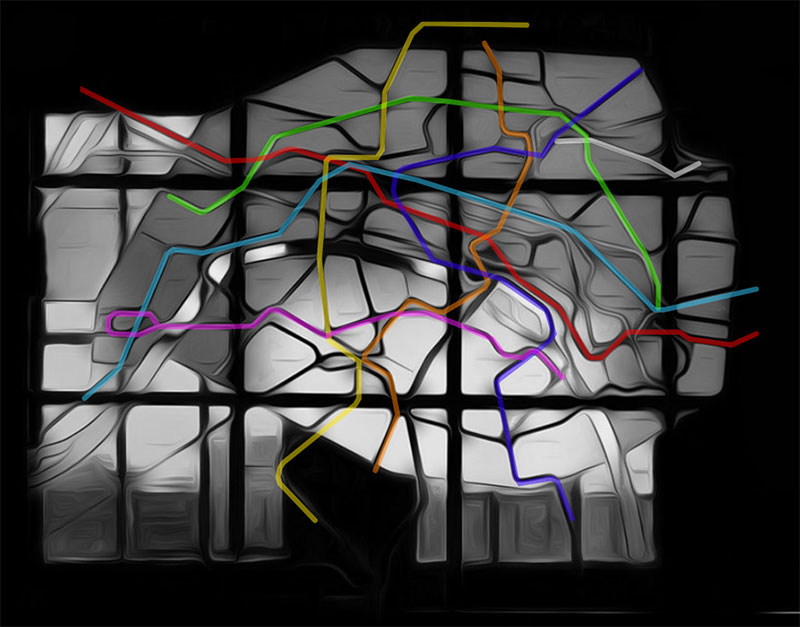 Note: When using a tablet or phone, it is best to view this site in the horizontal (landscape) position.

The Underground Cathedral is an ongoing project, which has been developed during several decades.

It began as a diagrammatic study of the first known sophisticated signs of life on earth, which are found on the floor of the ocean. Eventually a connection was drawn between these forms and the mappings of underground subway systems. The aesthetic exploration of these maps throughout the world became a study of cultural diversity and universal truths. This led to a personal exploration of the other world of underground landscapes during travels from Frederick Abrams’ native home of southern California, where during his childhood the largest commuter train system in the world had been controversially dismantled. What followed during adulthood was a long journey, as Abrams lived in New York City, Paris, Barcelona and Poland between 1987 and 2012, where he witnessed, participated in and documented historical transformations from the birth of the European Union to the collapse of the Soviet Union.

In 2013, an article documenting The Underground Cathedral by Samuel Merrill was published in London, in the book, Going Underground: New Perspectives.

The different sections of the site are color coded, similarly to a typical subway map. The light blue line opens up an interactive transcription of a broadcasted interview on France Culture Radio, which details how this project has continued to evolve since its inception, in media ranging from the traditional craft of stained and leaded glass to CAD design, photography, computer graphics, music and film.

There is much more of Abrams’ multimedia work, including The Underground Cathedral, on his other website: https://abramstower.com

Please send any comments or questions to undergroundcathedral@gmail.com

The complete contents of this site are copyright Frederick Abrams and The Underground Cathedral, unless otherwise indicated. The contents may not be reproduced in whole or part, in any form, without prior written consent.